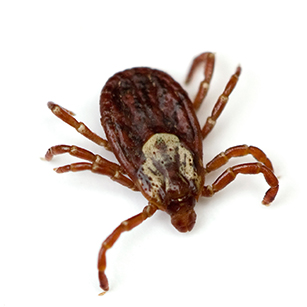 Ticks are tiny parasites in the Arachnid family that feed exclusively on blood from animal hosts to carry out their life cycle. There are hundreds of different kinds of ticks in the world. Many of them carry bacterial, viral or protozoal pathogens that can be transmitted to wildlife, pets, and humans through their bite. In addition to infections, a bite can cause serious tick-borne conditions.  Ticks transmit more kinds of disease agents than any other kind of arthropod vector and are increasingly being found to harbor more than one pathogen; making them capable of transmitting multiple diseases in a single bite. In addition to being vectors of disease, ticks can also cause tick paralysis via toxins in their saliva to both humans and other animals, which can be potentially fatal. Tick bites have also been linked to causing  Alpha-gal syndrome or “meat allergies” in a growing number of people. There are approximately 900 species of ticks found throughout the world. Of the 84 species of ticks endemic to the US, 40 species have been documented as ectoparasites of humans.

Understanding tick behavior will help you minimize your risk of tick bites. Though some ticks are considered “nidicolous,” meaning they remain on their host or near their host species nest and burrows, the majority of ticks most frequently encountered by humans, pets and wildlife actively “quest” for their blood meal. A questing tick will crawl up the stem of tall grass or brush and extend its front legs. On its front legs, a tick has a special sensory structure called the Haller’s organ, with which it can detect a nearby host by the smell of body and breath odors, heat, vibrations, and even carbon dioxide emission through our breath.  Once a tick detects that a potential host is approaching, it waits to grab hold. Ticks do not jump from above but rather they attach to the host as it brushes past the vegetation on which the tick is questing. They then crawl upward in search of a good place to bite and attach to take their blood meal. Some ticks are more aggressive in their questing behavior and may seek a host rather than waiting passively for the host to come to them. Taking care not to walk through areas of thick or tall vegetation, especially at the edge of trails, and avoid sitting directly on the ground, on logs, against trees or near rodent nests or dens can help reduce your exposure.

There are three main kinds of ticks:

They are recognized by the hard, shield-like scutum on the dorsum (back) and usually feed on hosts for long periods (typically days at a time). Most hard ticks complete the classic life cycle, including egg, larva (six legs), nymph (eight legs), and adult. The life cycle of a hard tick most often involves feeding on three different host individuals once during each life stage, followed by a molt and dormant period at the larvae and nymph stages. After their third and final feeding (when mating occurs), engorged female ticks drop from their host, crawl away and oviposition (deposit thousands of eggs), usually in leaf litter and then die. Male hard ticks may feed at this third stage, but are not able to fully engorge like females or the immature stages; they mate if able, and then die. Ticks in this family are responsible for transmitting the majority of diseases known to cause illness in both humans and pets.

These ticks lack an apparent dorsal shield that the hard ticks possess. Their behavior differs in two important ways from the more familiar “hard ticks”. First, the bite of soft ticks is generally brief (however, some species have long-feeding larvae, which require days to engorge, similar to hard ticks), usually completing a blood meal within minutes to hours. The tick will feed, and then retreat from their host, as opposed to the hard ticks which may remain attached and feed for days. Second, soft ticks do not quest for prey in tall grass or brush. Instead, they live within rodent burrows or nests, feeding as needed on the rodent as it sleeps. Soft ticks can live up to 10 years; in certain parts of the Russia the same tick has been found to live almost 20 years. Adult soft ticks, feed (unlike Otobius) and lay eggs several times, similar to mosquitoes. Some species are known to transmit Tick-Borne Relapsing Fever (TBRF) to humans.

Individual soft ticks will take many blood meals during each stage of their life cycle, and some species can pass infection along through their eggs to their offspring. The long life span of soft ticks means that once a cabin or homestead is infested, it may remain infested unless steps are taken to find and remove the rodent nest(s) and then treat with acaracides (pesticides) to eradicate the ticks. Humans typically become infected when sleeping in rustic rodent or previously bat infested lodging where they may be bitten when they sleep. Because the ticks feed for such short duration and the bite is painless, people may not be aware that they have been exposed. Those living, playing or working near rodent burrows or nests may also incidentally be exposed.

Nearly 30 species of ticks are currently known to occur Colorado, a state that uniquely serves as the namesake for a widely known tick-borne disease, Colorado tick fever.

Merten, HA & Durden, LA. (2000). A State-by-State Survey of Ticks Recorded from Humans in the United States. Journal of vector ecology : journal of the Society for Vector Ecology. 25. 102-13.