What is Tick Borne Relapsing Fever?

Tick Borne Relapsing Fever (TBRF) is a rare bacterial infection that is caused by more than a dozen species of Borrelia spirochetes and is transmitted by the bite of “soft bodied” ticks of the genus Ornithodoros, each of which has a preferred habitat and set of hosts. TBRF is found in mountainous areas of North America, plateau regions of Mexico, Central and South America, the Mediterranean, Central Asia, and much of Africa.

In the United States, TBRF occurs most commonly in 14 western states: Arizona, California, Colorado, Idaho, Kansas, Montana, Nevada, New Mexico, Oklahoma, Oregon, Texas, Utah, Washington, and Wyoming and is usually linked to sleeping in rustic, rodent-infested cabins in mountainous areas. Although not a nationally notifiable condition, prompt reporting of TBRF cases is currently required in most of these states. Only 450 cases were reported in the US from 1977 to 2000.  The states with the largest number of reported cases during this period were California, Colorado, Washington, Idaho and Oregon. Most cases occurred in the summer months, from June through September. National reporting is not mandatory and the true incidence of TBRF is unknown because it frequently goes undiagnosed and is underreported.

Humans typically come into contact with soft ticks when they sleep in rodent-infested cabins. Ornithodoros ticks feed for short periods, usually less than half an hour, and tend to take their meals at night. Their bites are painless, therefore most humans are infected while sleeping and are unaware that they have been bitten. Between meals, the ticks may return to their host burrows or nests.

There are several Borrelia species that cause TBRF, and these are usually associated with specific species of ticks. For instance, B. hermsii is transmitted by O. hermsi ticks, B. parkerii by O. parkeri ticks, and B. turicatae by O. turicata ticks. Each tick species has a preferred habitat and preferred set of hosts.

Ornithodoros hermsi, is the tick responsible for most cases in the United States. It prefers coniferous forests at altitudes of 1500 to 8000 feet where it feeds on tree squirrels and chipmunks and inhabits their nests.

The two other U.S. tick species that transmit TBRF, O. parkeri and O. turicata, are generally found at lower altitudes in the Southwest, where they inhabit caves and the burrows of ground squirrels, prairie dogs, and burrowing owls.

Most TBRF cases occur in the summer months when more people are sleeping in rodent-infested vacation cabins. TBRF can also occur in the fall or winter months when fires started to warm a hunting or winter cabin and may activate ticks resting in the walls and woodwork. Eradicating the host mammal (e.g., squirrel or chipmunk) from the dwelling without eradicating the nest or killing the ticks may increase risk of human encounter as the ticks seek a blood meal outside of the recently abandoned nest or burrow in a cabin.

Regardless of location, health care providers should report cases to appropriate state or local health departments. Large multistate outbreaks have been linked to rental cabins near national parks and other common vacation locations, and prompt reporting by clinicians was critical to the identification and control of these outbreaks. Soft –bodied ticks are long lived. Without corrective action, tick-infested cabins can remain a source of human infection for many years.

Prevention requires attention to rodent control and possible pesticide treatment to assure ticks are eradicated from dwellings that people inhabit. 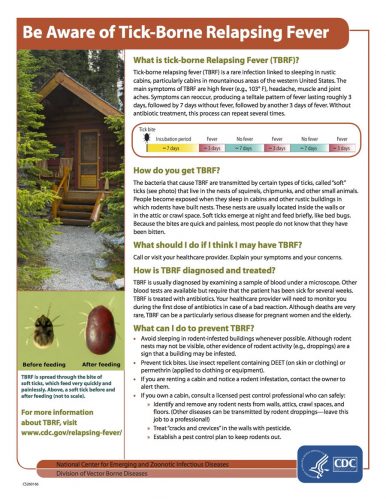 Is TBRF in Colorado?

Yes, TBRF is in Colorado! Colorado is one of the top 5 states for disease reporting between 1977 and 2000. This is considered a rare disease as only 3 cases of TBRF were reported in Colorado in 2015, with a 6.2 average for cases between 2011 and 2015. True incidence is likely higher due to undiagnosed or misdiagnosed cases. Many people that acquire TBRF are vacationers. Outbreaks have occurred in rustic vacation cabins, such as in Estes Park, Colorado in 1995. Though B. hermisii, transmitted by O. hermsii is the most common pathogen associated with human illness here, B. parkeri carried by O.hermsii, has been identified in Moffat, Colorado associated with prairie dog towns and may be a potential for human disease in Colorado. Additional research and surveillance is needed. 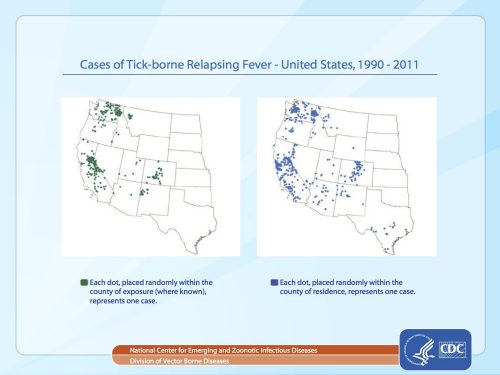 What are TBRF Symptoms?

The incubation period for relapsing fever is usually around a week. Symptom onset is abrupt, and consists primarily of episodic febrile events, commonly lasting a few days, followed by slightly longer periods of resolution. Without antibiotic treatment, this process can repeat several times. More than 10 cycles have been reported in untreated patients.

Symptoms of TBRF are non-specific and may include, but are not limited to:

Infection with B. turicatae is especially likely to result in neurologic involvement.

How is TBRF Diagnosed?

A pattern of recurrent fevers in a patient from an endemic area should prompt an evaluation for relapsing fever.

As its name suggests, TBRF symptoms recur. Fever cycles often present in a classic pattern commonly referred to as a “crisis.” Each febrile episode ends with a sequence of symptoms known as a “crisis.” A very high fever may develop (up to 106.7°F) and the person may become delirious, agitated, and may experience an increased metabolic rate such as rapid breathing and tachycardia. Duration is typically 10 to 30 minutes. Shortly thereafter, body temperature falls dramatically and the patient experiences drenching sweats. Severe drops in blood pressure can occur during this second stage. Untreated infections will result in several episodes of fever before illness resolves.

Other findings are nonspecific and variable depending on the severity of illness and when the patient seeks medical care. Patients typically appear moderately ill and may be dehydrated. Occasionally a macular rash or scattered petechial rash may be present on the trunk and extremities. Less frequently, patients may have jaundice, hepatosplenomegaly, stiff neck, and photophobia.

Definitive diagnosis may be made through visualization of spirochetes on a peripheral blood smear during the febrile periods of illness. Blood should be drawn prior to initiation of antibiotics if TBRF is suspected.

How do you test for TBRF?

The gold standard for TBRF diagnosis is the visualization of spirochetes in smears of peripheral blood or cerebrospinal fluid (B. hermsii, B. turicatae, or B. parkerii in the US). Spirochetes in the blood during the early febrile stage of illness often reach high concentrations, 100-1000 times more than in cases of early Lyme disease. Dark field microscopy is the preferred method, but various stains (such as Wright-Giemsa or acridine orange) are also used.

The number of circulating spirochetes decreases with each subsequent febrile episode, making it harder to detect spirochetes on a peripheral blood smear. Even during the initial episode spirochetes will only be seen 70% of the time.

Serologic tests (direct and indirect immunofluorescent assays) for relapsing fever can be performed, but they are not standardized across laboratories and not useful for timely diagnosis. Cross reaction with antibodies to Lyme disease and syphilis have also been reported.

PCR tests exist but are not widely available.

How is TBRF treated?

The CDC has not developed specific treatment guidelines for TBRF; however, TBRF spirochetes are susceptible to penicillin and other beta-lactam antimicrobials, as well as tetracyclines, macrolides, and possibly fluoroquinolones.  First line antibiotic agents are doxycycline and erythromycin, but chloramphenicol and parenteral penicillin G are also used. A common regimen is 100 mg of doxycycline every 12 hours, or 500 mg of erythromycin every 6 hours, for one week. Intravenous penicillin is recommended in cases of suspected or proven central nervous system involvement.

When initiating antibiotic therapy, ALL patients should be observed during the first 4 hours of treatment for a Jarisch-Herxheimer reaction caused by the massive release of cytokines during the spirochete die-off. The reaction usually begins 2-4 hours after antibiotic administration and is similar to the crisis stage of the fever cycle. Typical presentations are elevated fever, increased respiration and heart rate, excessive sweating, chills, and sudden changes in blood pressure. In addition, acute respiratory distress syndrome requiring intubation has been described recently in several patients undergoing treatment for TBRF. Fatalities from the J-H reaction can occur.

Colorado Department of Health and Environment webpage and personal communication.